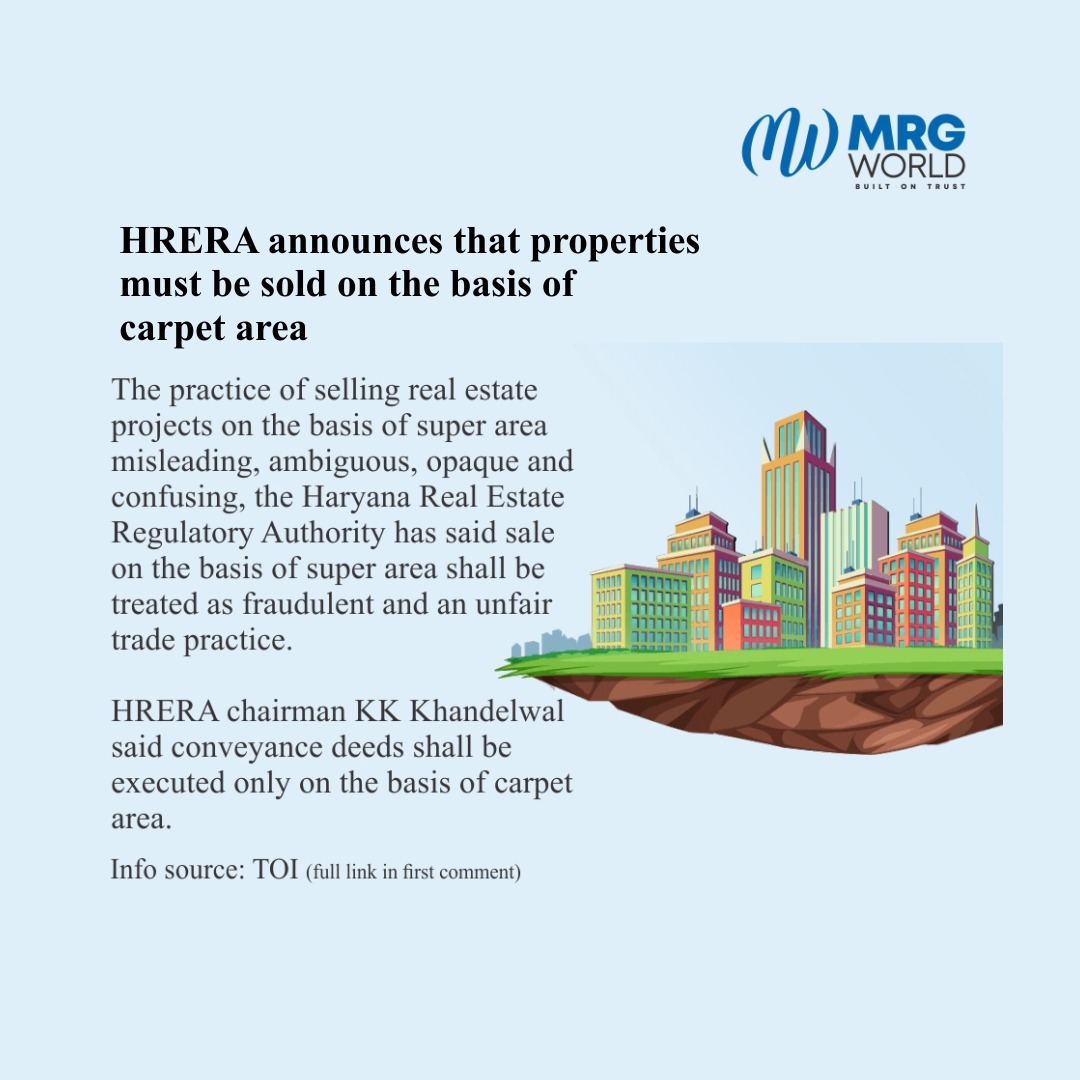 The Real Estate Regulatory Authority, which was set up to increase transparency and remove corruption in the Indian real estate sector, seems to be doing its job quite well. In yet another blow to corrupt developers trying to trick homebuyers into shelling out more, HRERA has announced that all sales must take place on the basis of carpet area. In the past, many of the developers that built real estate projects in Gurgaon used to price the properties based on super area. The issue, however, is that the definition of the super area varies significantly. Even the builder-buyer agreements provide only a vague description of the super area. This enabled the builders to force the buyers to pay more than they are actually supposed to.

HRERA termed the practice of selling properties based on the super area as opaque, ambiguous, misleading and confusing. Further, HRERA also announced that the act of selling a property by pricing it according to the super area would be considered to be an unfair and fraudulent trade practice. As per the Chairman of HRERA, the real estate agents and promoters who still violate this rule would have to face penal charges.

The issue of this new regulation would indeed play an important role in improving the transparency in the real estate market. According to RERA, pricing properties as per the super area is unfair if the buyer does not receive specific details regarding the breakup of the components covered under the super area. Plenty of individuals who buy affordable homes in Gurgaon are often fooled by developers as the term super area is not specifically defined.

In the past, carpet area lacked a specific definition too. When the Real Estate (Regulation and Development) Act was formulated in 2016, a specific legal description of the term ‘carpet area’ was added to it. According to the act, carpet area only constitutes the net usable area in a property. The new regulation does not end at making the upcoming affordable housing projects in Gurgaon more transparent. Even in the case of the ongoing projects where the flats have already been allotted based on the super area, the promoters will have to disclose all the components covered under the super area. The promoter must also disclose the carpet area if the conveyance deed of the property has not been executed yet.

However, even if the developer now has to register a property based on the carpet area, this would not result in a change in the total cost of the unit. Thus, the sale condition would not undergo any changes as a result of the regulation. The purpose of making the developers disclose the details is only to obtain exact descriptions.

While the carpet area consists of the spaces that the homeowners can actually use, the super built-up area includes the spaces covered by the walls, pillars, balconies, etc. Even a share of the common spaces and amenities is included within the super area. The best affordable housing projects in Gurgaon are expected to witness a rise in sales due to the increased transparency.